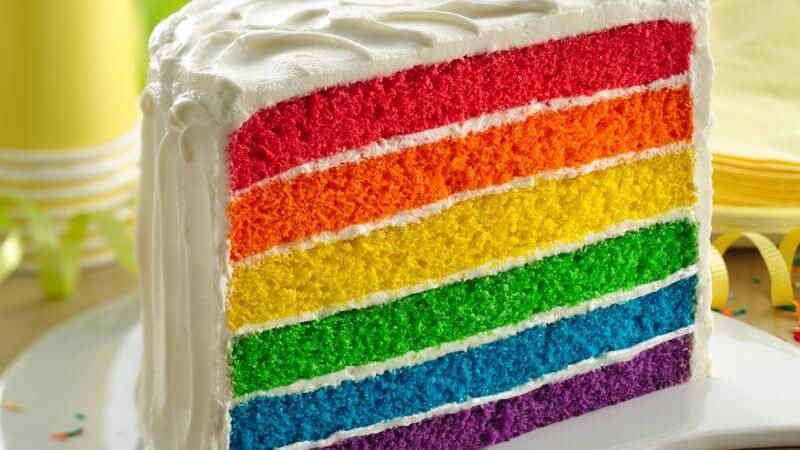 Chums! The time has finally come for the much-anticipated Rainbow Cake tutorial! This is how to make Rainbow Cake in the UK!

This is not a cake for the fainthearted! It contains a LOT of sugar, and a LOT of artificial colouring. It’s the sort of thing I almost certainly wouldn’t have been allowed to eat as a child – but now that I’m a grownup I can go absolutely WILD and bake whatever I want. Stickin’ it to the maaaan.

I made this cake for my beautiful friend Tara because it was her birthday. Roughly speaking, I followed the Martha Stewart recipe (which she got from somewhere else, but that’s the internet, guys!), but I’ll take you through what I did!

So let’s start with ingredients! Obviously, Martha Stewart’s recipe is American, so I had to substitute with ingredients I could find in England! I also converted all of the American measurements (cups, etc) into Metric measurements, using the wonders of Google.

Here’s what I used:

Last but not least, the food colourings. These were a bit of a mission for me! I live in London, but there still appear to be less than a handful of shops that sell proper gel food colouring. I’ve made rainbow cakes before that have come out lacklustre and dull, despite the fact that I’d added the best part of a whole bottle of liquid food colouring! Our traditional English food colourings, whilst lovely and nostalgic in their little bottles, do not produce the bright colours you can get from American gel colours. I’ve tried the ‘Silver Spoon’ gel colours too, and they don’t even come close to these ‘Sugar Flair’ wonders. Now, you can get them on the internet, but I made a trek to Chelsea, to visit the Jane Asher Sugarcraft shop. It’s well worth a visit, if you are in the area and love cakey fun.

For the icing, you’ll need:

Let’s make this bloody cake then.

Oh, I ought to mention at this point, that if you have a hand whisk, your life will be a million times easier when making this cake! Unfortunately, I do not have such luxurious items, so I did it the old fashioned way – with a wooden spoon! So, make sure your butter is lovely and soft, and mix it all up with your sugar, until it looks like a big yellowy play-dough ball!

Your next move, is to separate the whites and the yolks of your five eggs. We only need the whites, because we want the cake mix to be as white as possible. Then, mix it up with your buttery, sugary joy – until it is gooey and combined!

Then add the vanilla extract. Daintily.

Set aside your goo, and focus on the powdery ingredients for a moment. Sift together flour, baking powder, and salt. There you go.

This next bit is a little more tricky. Sift a bit of your flour mixture into your goo. Mix it up. Next, pour some of your carefully measured milk in. Mix it up. Then go back and put more of your flour mixture in. Keep alternating milk and flour until everything is smooth. Once that’s done, divide your mixture into SIX BOWLS. As equally as you possibly can. Round about now, turn your oven on to preheat. (180 degrees celcius, gas mark 4, 350 degrees fahrenheit)

Once you’ve divided it up into the different bowls, you can get to the super fun bit of mixing in your colouring! Start off with a tiny, tiny bit, and mix it like hell, until your mixture is pretty! Then add more! Keep going until it’s really bright. Here are just four of the six colours I made. It had started to get dark outside by this point, so the colour doesn’t look as amazing as it would have in daylight. Ah well.

Grease your tins with butter. You may have to improvise, and do it one layer at a time like I did, as I only have one round cake tin. It just means you will be baking for a long time. Fortunately, because each layer is very thin, they do bake quickly! They will take roughly 15 minutes, but I always check by sticking a skewer in and seeing if it comes out ‘clean’. I recommend a cake tin with a bottom that pushes out, as it makes cake removal so much easier!

Whilst your cakes are baking, get started on the icing. This is going to involve creaming together roughly 500g of butter with a kilogram of icing sugar, give or take. You will need a LOT of icing. I weighed the cake when I’d finished, and it was about 3kg in total. Butter icing is naturally an appetising yellowish colour, but as I said before, natural is not what we want in this cake! I added Sugar Flair’s “Super White” powder, which does magically make icing so much whiter! It’s really cool. The key with buttercream icing is to play it by ear and keep adding icing and/or butter until it is the right consistency for you. I ended up making more as I didn’t have enough to cover the whole cake. Take your cakes out of the oven, and LET THEM COOL! Never put buttercream icing on a warm cake, or everything will be ruined forever.

When they are cool, start to stack them. Start with the purple one on the bottom, followed by a layer of icing. Follow it with the blue layer, and then more icing. Each layer of icing should be lovely and thick. Keep sandwiching the cakes together in rainbow order, finishing with the red one. When you’ve got your amazing cake tower, cover the top and the sides in the remaining buttercream icing. Then, remove several shelves from your fridge so that you can store the monstrosity overnight.

So there you have it. A mammoth post about rainbow cake! It was a slog to make, and I’d really recommend doing it with a friend, because it would be good fun and also cut down the making time a lot! Baking with friends is the best kind of baking. Give it a go. If you’ve got any problems or something isn’t clear, leave me a comment and I’ll try to help you as best I can.