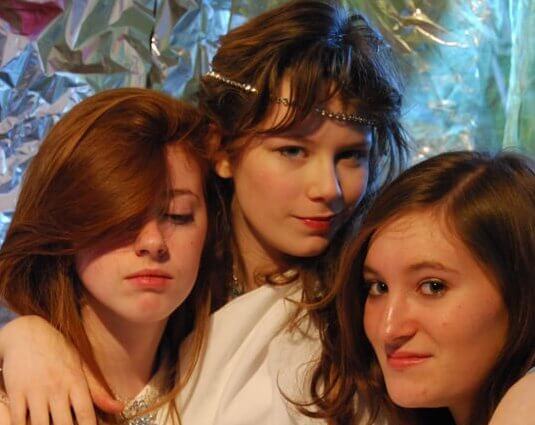 Today, i wore a T-shirt which had “i’m a post-feminist in a post-patriarchy” emblazoned on it. i was being ironic, but i would consider myself a feminist. it really annoys me that feminism has that stigma attached to it of women being ‘anti-men’ or militant lesbians. that stigma was of course put in place by men! in actual fact, feminism is about men and women being treated equally.

on the other hand, someone once suggested to me: what if men and women AREN’T equal? in some ways, we aren’t, for example, it cannot be denied that men are on average physically stronger than women. in my opinion, this should not change the way that men and women are TREATED. anyhow, as i was saying, what if we AREN’T equal to men. what then? an interesting thought.

i went busking today with my band, and freya. no original material, just christmas carols, but we did manage to make over thirty pounds in half an hour! we were singing in four part harmony, so it deserved it really! we got asked by this random woman to sing outside the quaker meeting house tomorrow. it was like being talent-spotted… but not as good! ha!

i am on the left, kat is in the middle, and tilly is on the right. we are dressed as romans, of course! our ‘sound’ is a cross between Regina Spektor, Bat For Lashes, Yann Tiersen, Piano Jazz, a barbershop quartet (but there are only three of us!), and other weird stuff! i play the piano, and other keyboard instruments. i also begin most of the songs. the other two sing, play the psultry, the violin, and percussion. i would love to make it big… but it is fun right now!

i have been obsessed with this really strange Italian film for a while. it is called ‘Tre Metri Sopra Il Cielo’. i have only ever seen it in Italian with no subtitles, so i don’t really even know what is going on in it. and the sound track is full of cheesy Italian pop music… but i really do love it somehow. it is the one thing i have to thank my french exchange student for… anyway, i watched it with tilly, and she finally saw what i had been going on about for the past year.

Tomorrow night is Naomi’s birthday, and we are going out for dinner. and it is a week today until my birthday.

so for now, i sign off. i am going to make myself a red-Leicester sandwich… 🙂